I have been quite apprehensive about being part of Wirksworth Art and Architecture Trail. But it was a very successful weekend

with some lovely comments from people and some sales so all very positive. 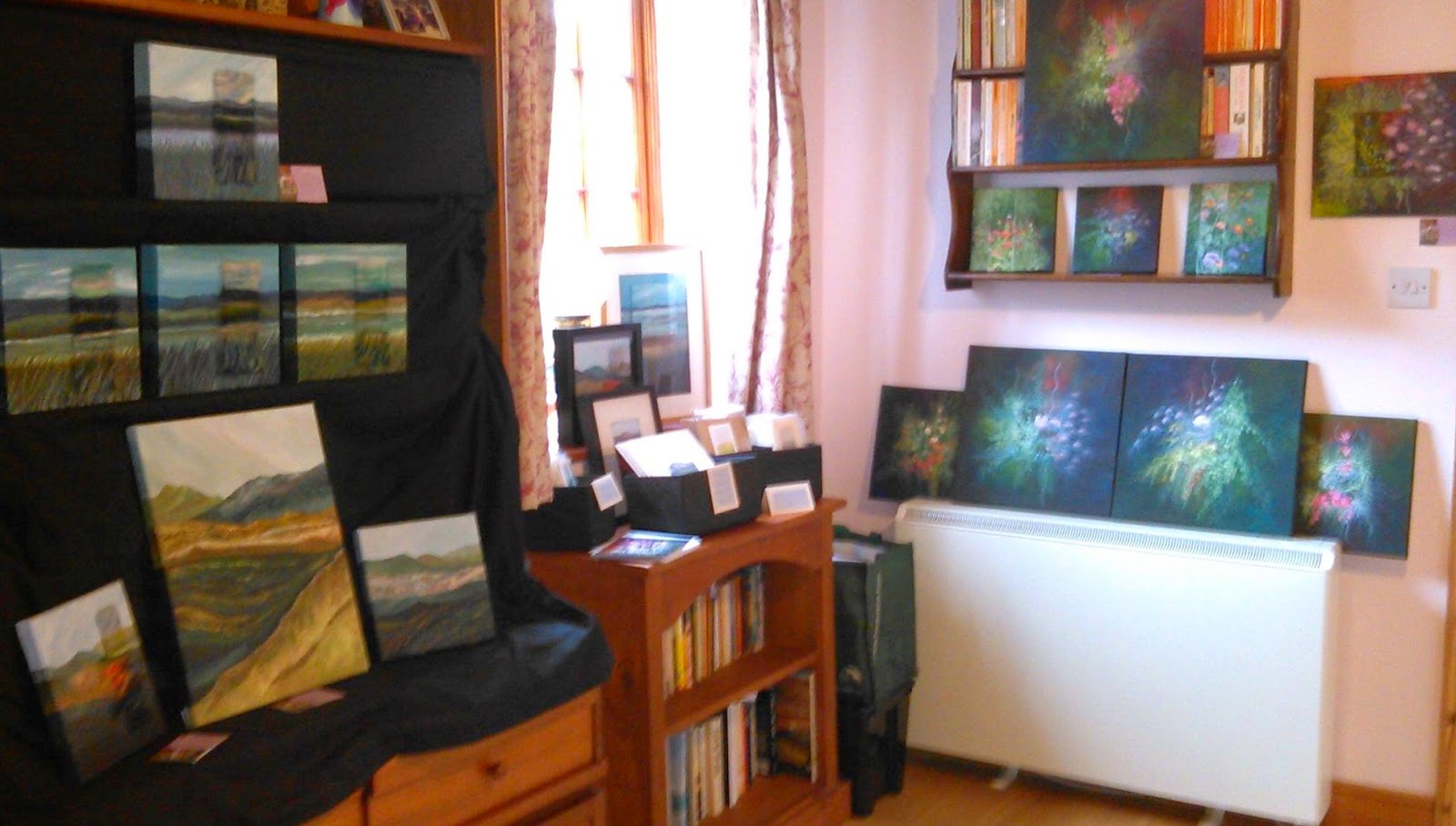 Work on display for the festival 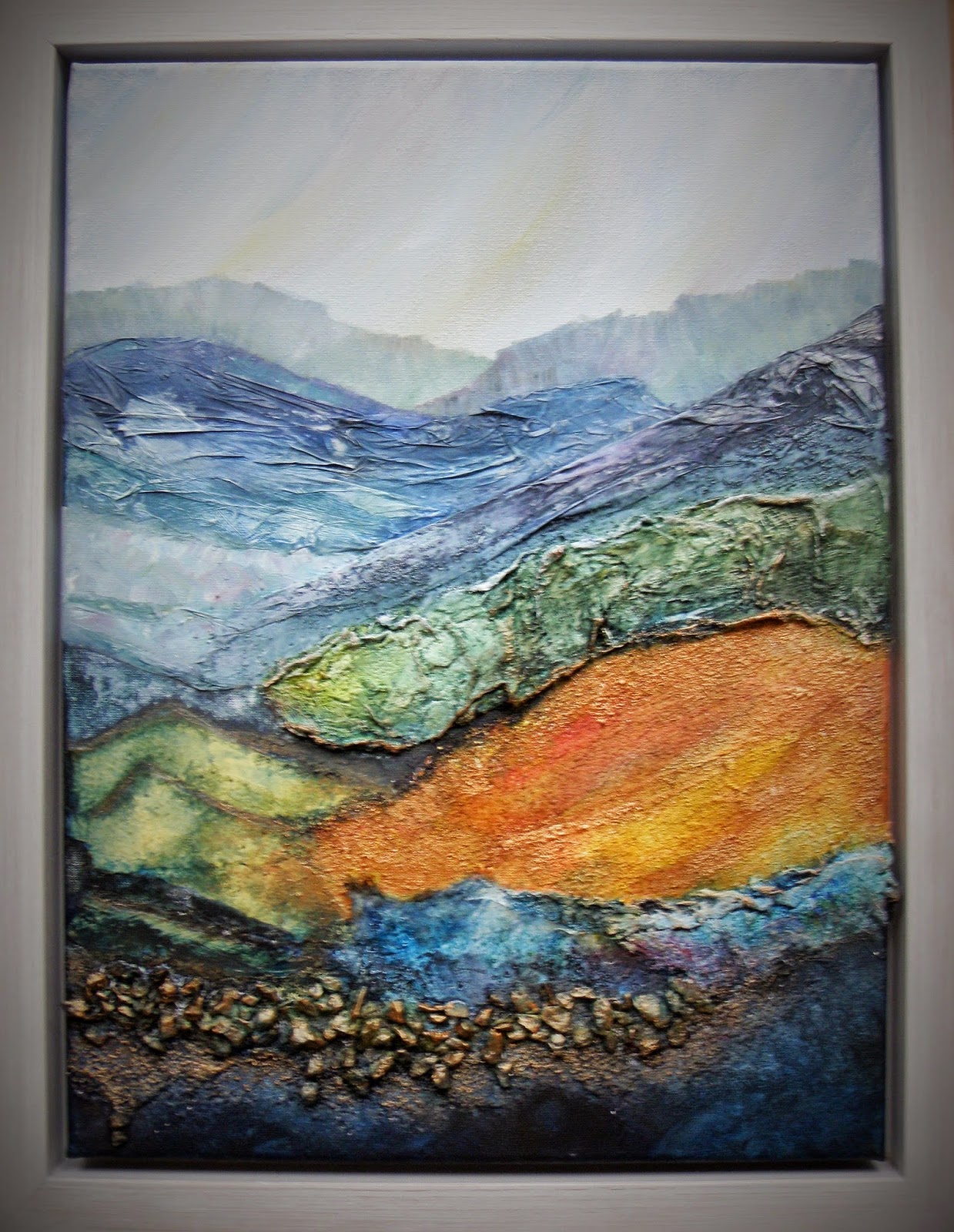 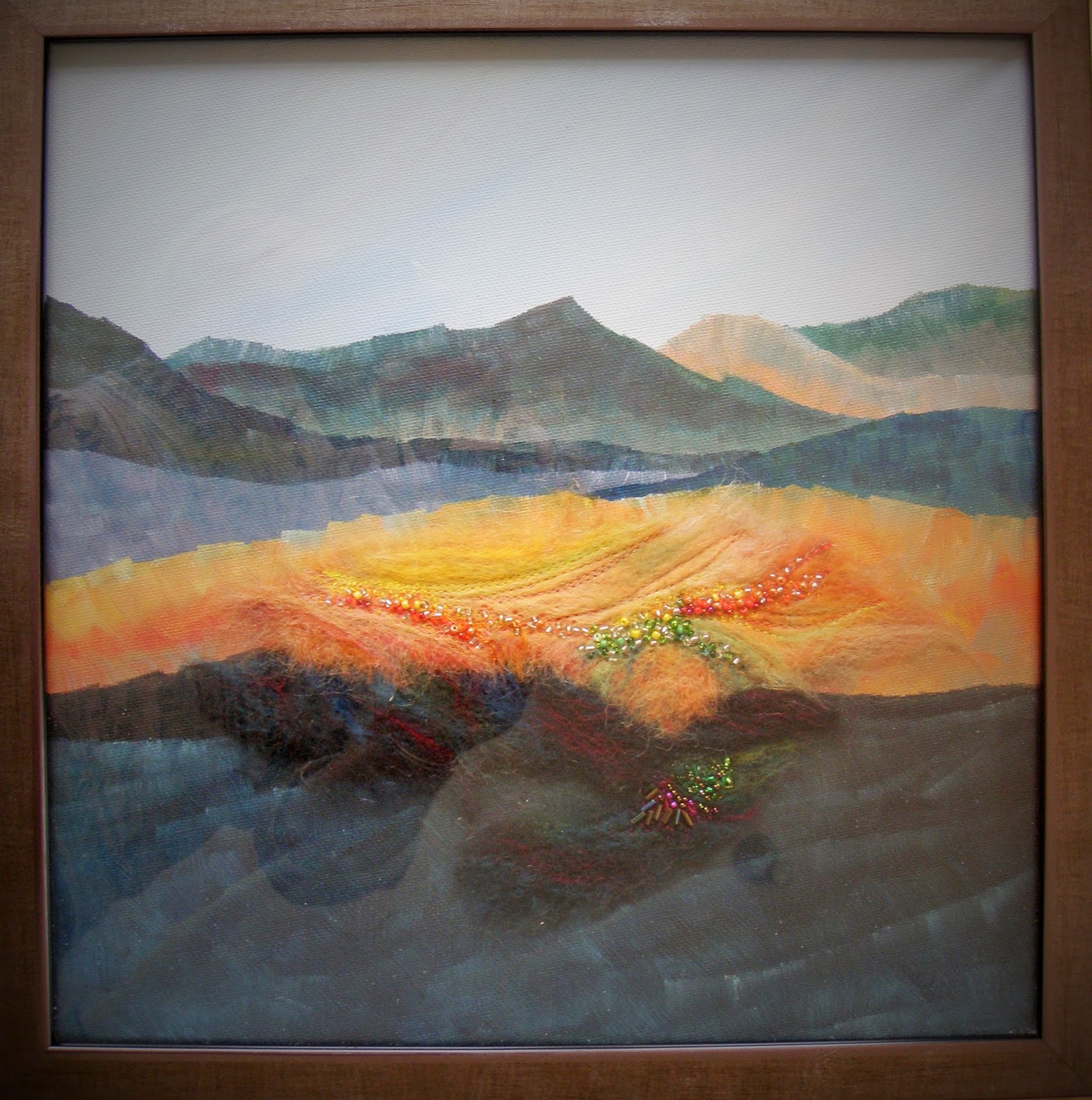 I was also very pleased with the frames I had done for some pieces of work - what a difference a frame makes! Many thanks to John Carnall at Leabrooks Gallery for these.
All in all I am really glad that I did the trail - listening to people's comments has been really encouraging and a real confidence boost.

Posted by famillemitchell at 12:58 No comments: 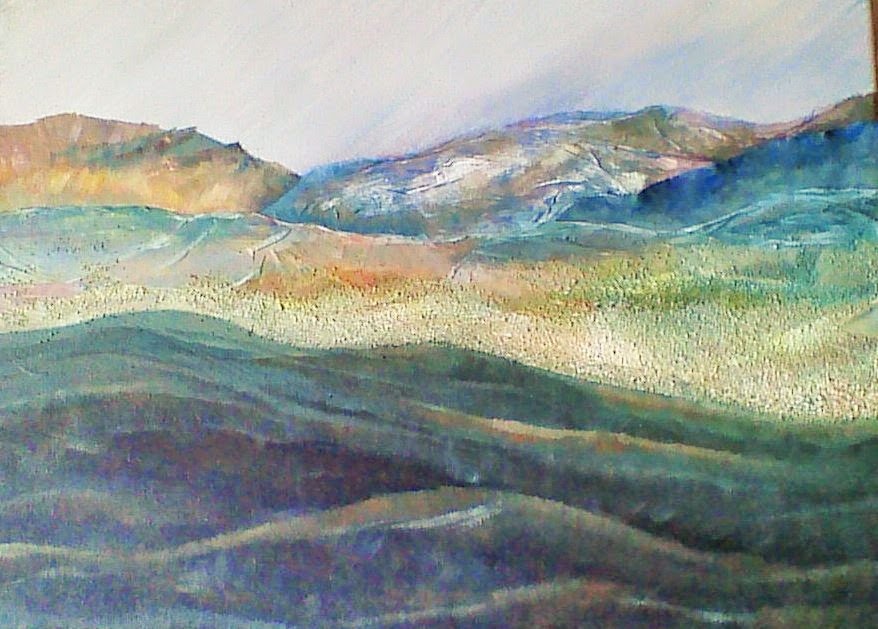 I am still finding lots to explore in the volcanic landscapes. I have been exploring some more subtle colours and gentler textures. 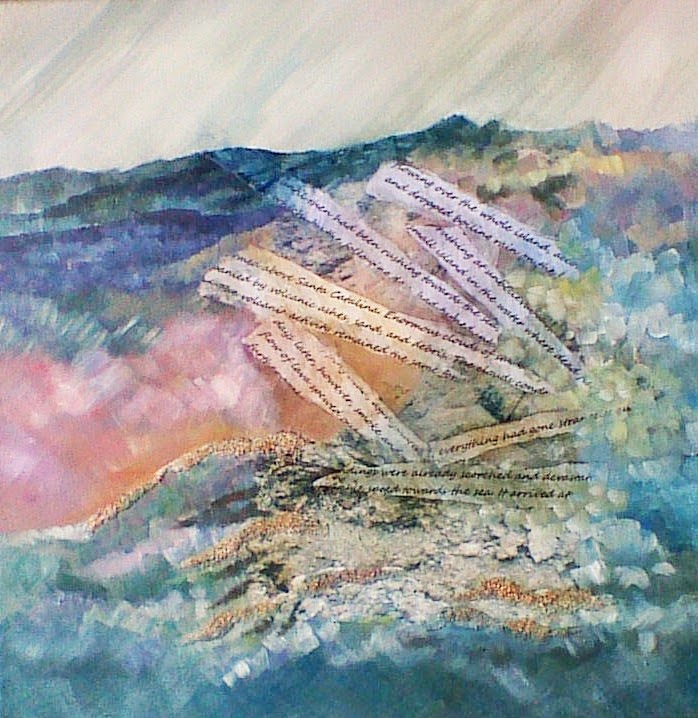 This piece  was an experiment incorporating some sections of text from the eyewitness report of the volcanic eruptions written by the local priest. He uses some wonderfully descriptive and poetic language
'New eruptions started on January 7, 1731, with spontaneous fireworks embellishing the sadness and desolation of the south. Powerful eruptions with incandescent lava and blue and red lighting crossed the night sky.' 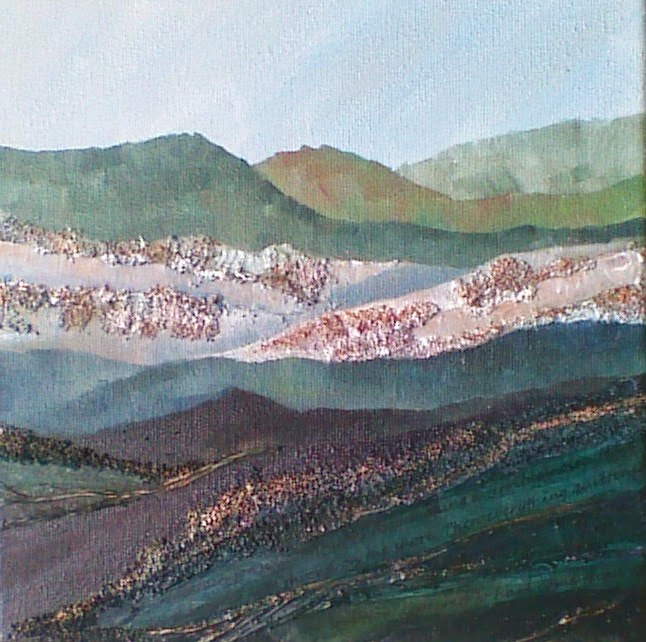 These small pieces use the more subtle colours and sections of the text, they weren't intended as a triptych but they do work quite well together. I think I might develop this on a larger scale - the triptych idea could be a first stage to worker larger and creating more impact. 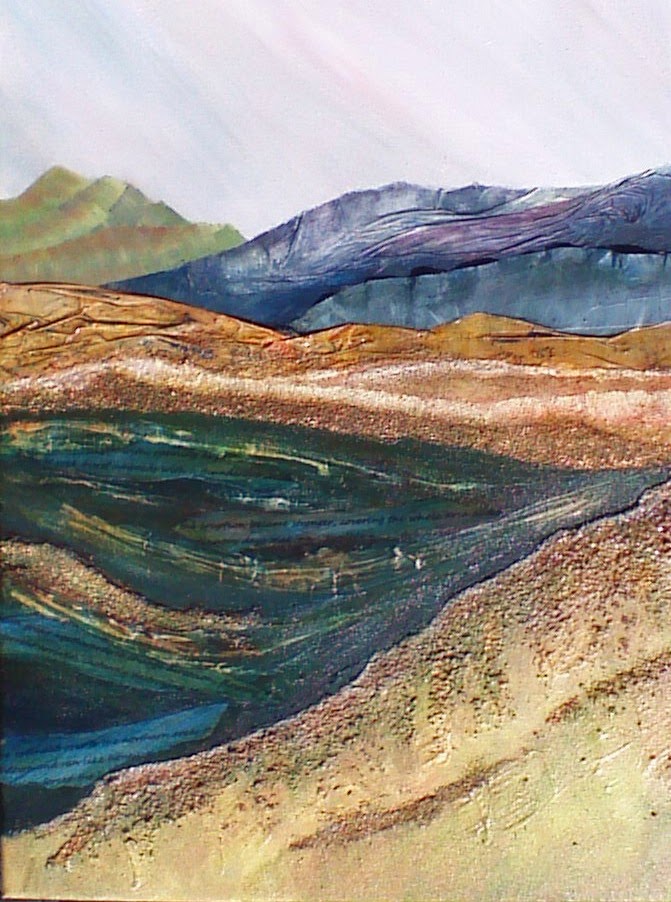 This is the latest piece that I have done which I think works well and brings together the ideas and techniques that I have been exploring. I just hope that the paint is dry for Wirksworth next weekend! 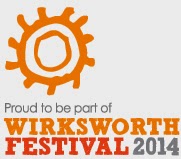 Posted by famillemitchell at 05:24 No comments:

And now for something a little bit different! 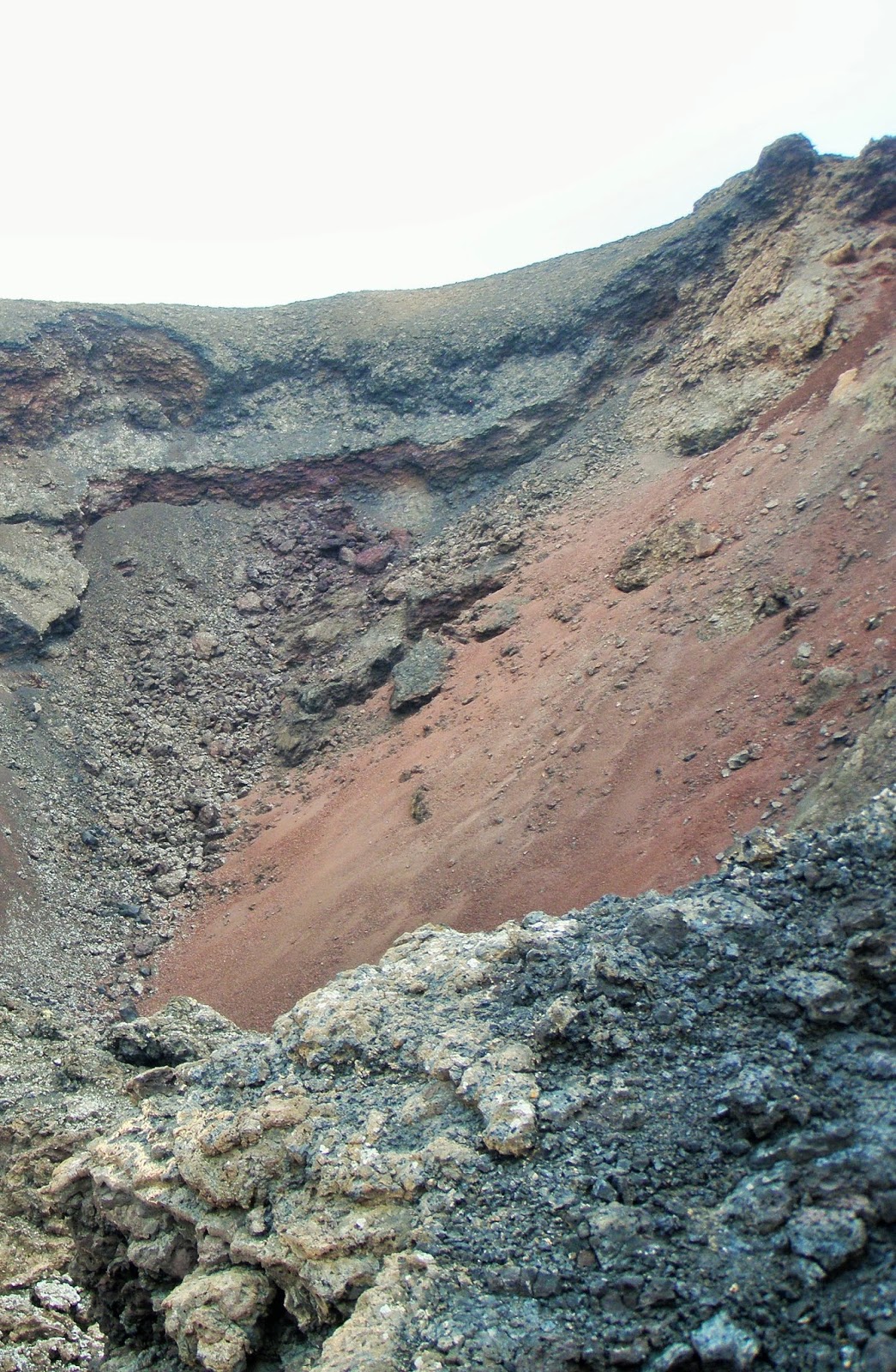 I have been taking inspiration from some photographs I took in Lanzarote and the wonderful colours and textures of the volcanic landscape. 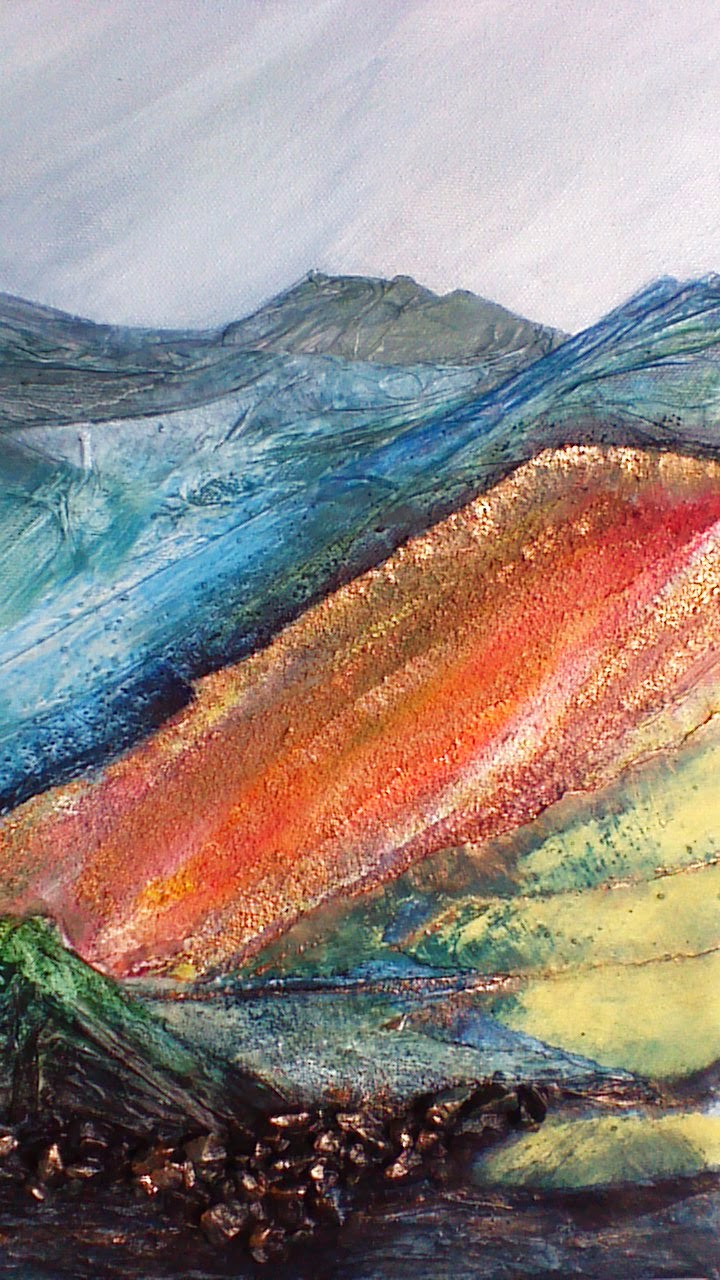 After some time spent working in my sketchbook and trying out different ideas this was the first piece I created. There are areas created with tissue paper, sand, torn card, there are small Ares highlighted in gold. 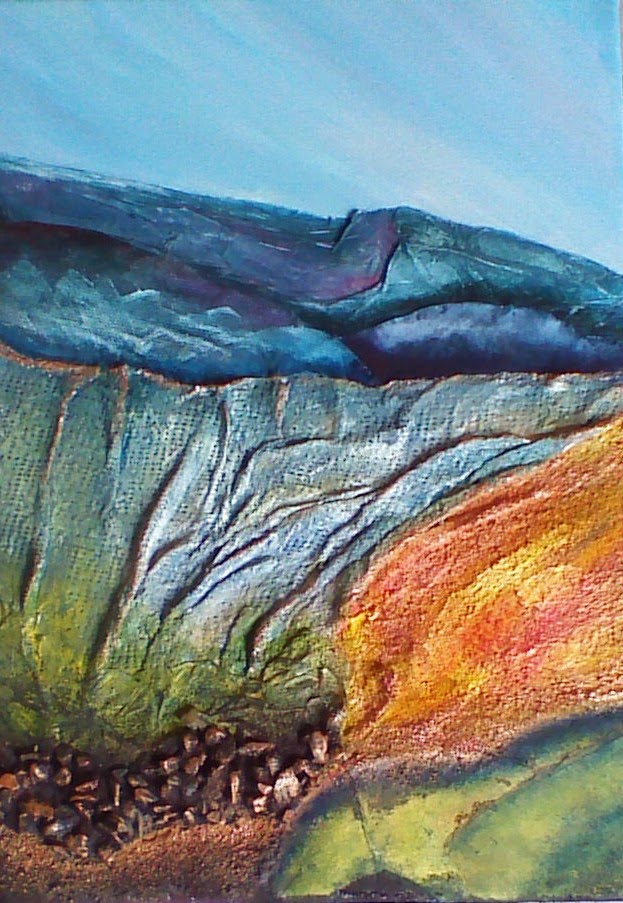 This is another piece with the addition of an area of modroc to create more defined texture through the central area. 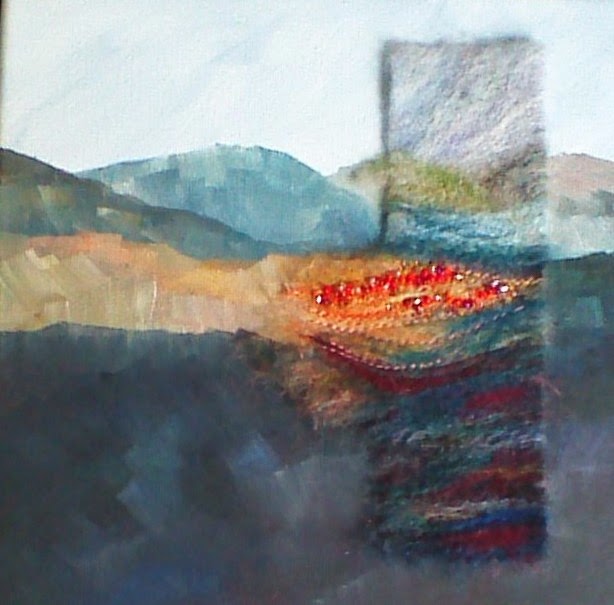 This piece is quite small (20cm x 20cm)and has an area of needle felting running through it enhanced with machine embroidery, hand embroidery and tiny beads. 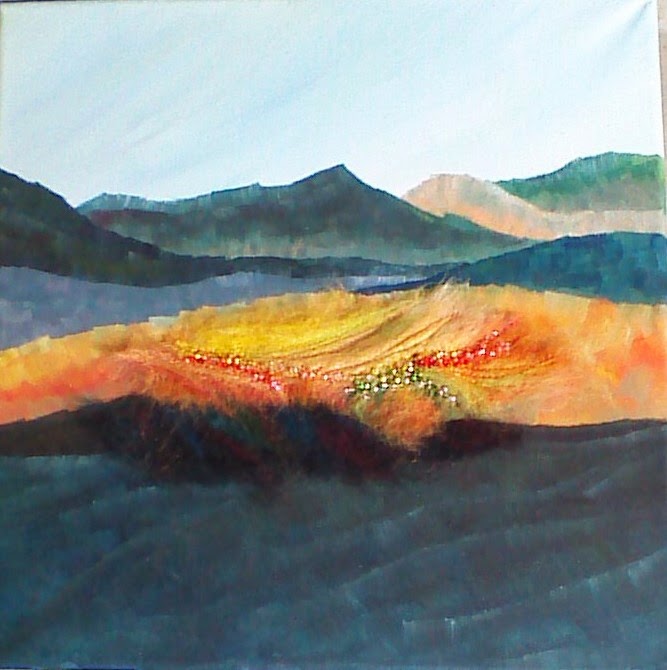 And finally, for the moment, a slightly larger piece with an irregular shaped area of needle felt and embroidery running through the central section (shown in the bottom photograph)


Posted by famillemitchell at 09:45 No comments: 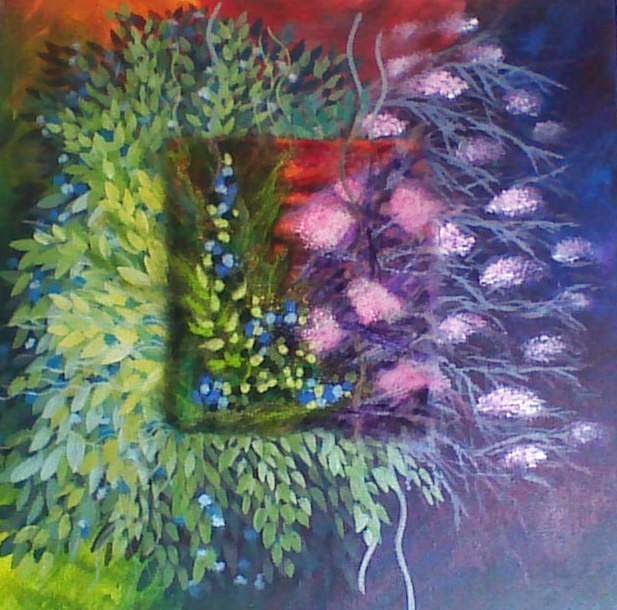 I created a central section for this picture using needle felting - I really like this technique as it is like painting with fibres I added details using both hand and machine embroidery.
I think there is lots of potential in this idea - I need to get out with my camera and sketchbook to find some new inspiration now that spring has finally sprung!

Posted by famillemitchell at 10:55 No comments:

I am still struggling to really move my work forward. These are the latest pieces I have created. 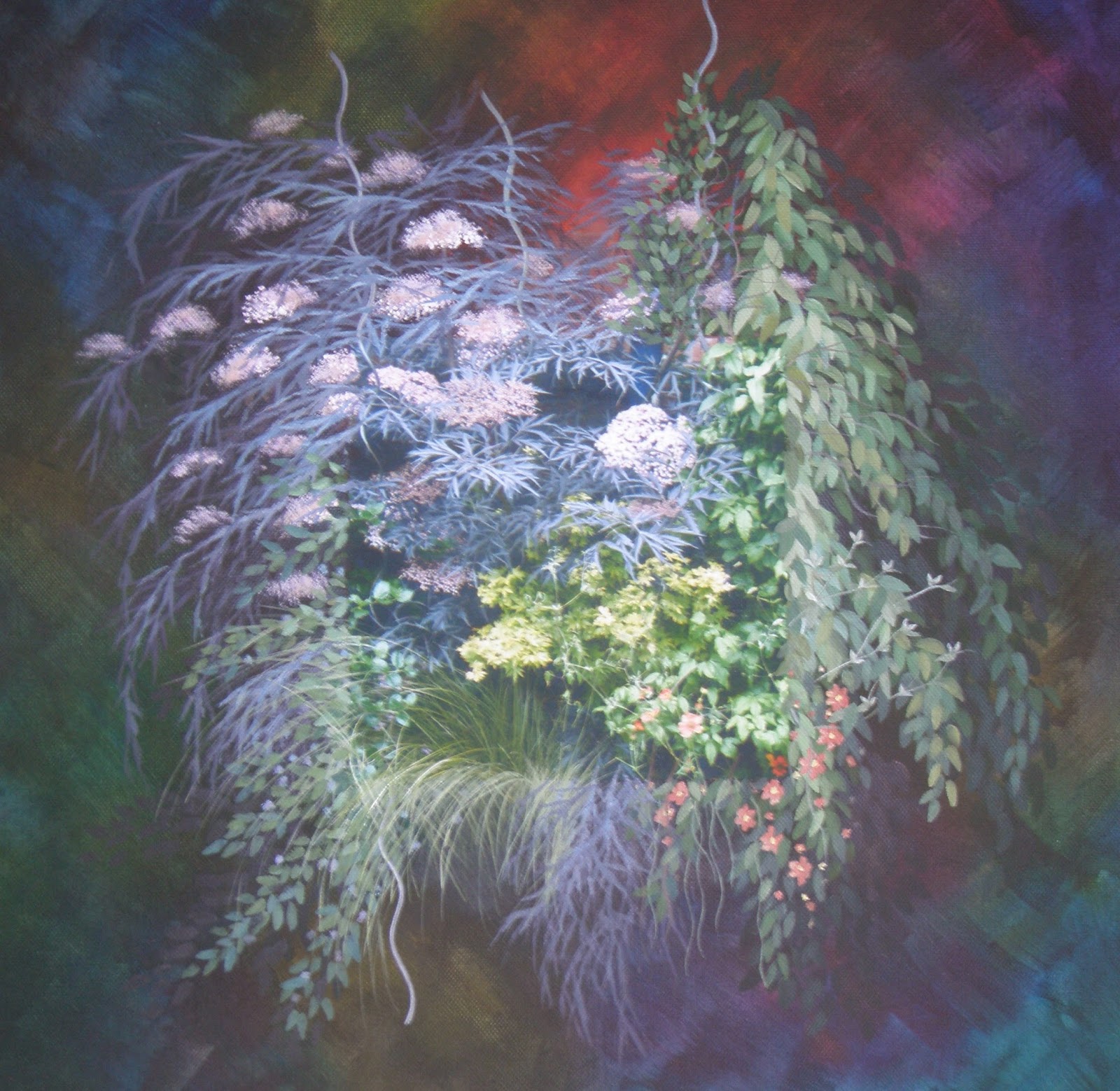 This is the biggest piece that I have done in the garden series. It measures 60cm x 60cm and I have tried to accentuate the central photograph in some areas rather than making it blend in completely. It seems to work quite well and I am pleased with the size. 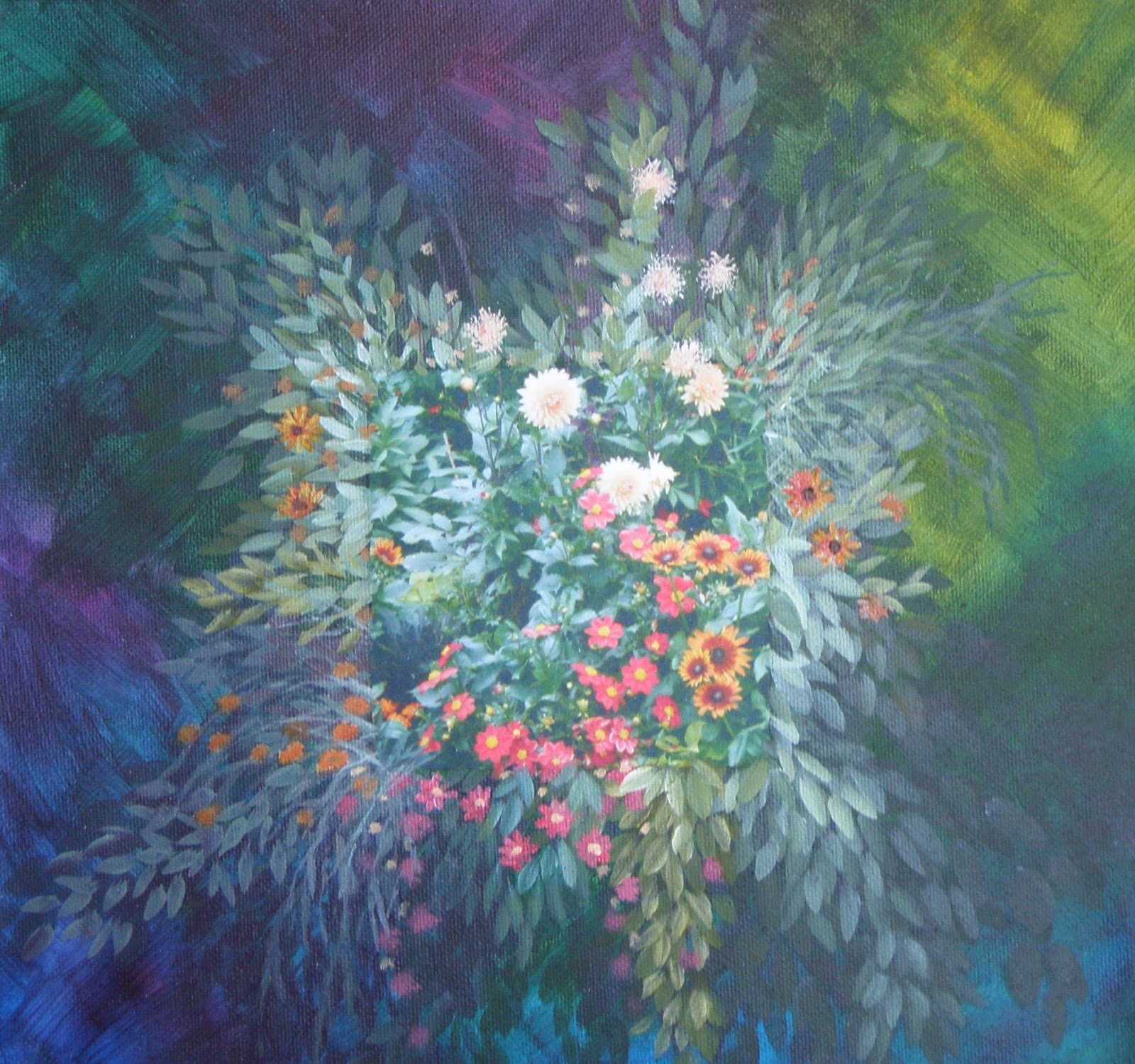 This piece is based on one of a series of photographs which I took on holiday in France - I think these will be the 'Jardin' paintings! 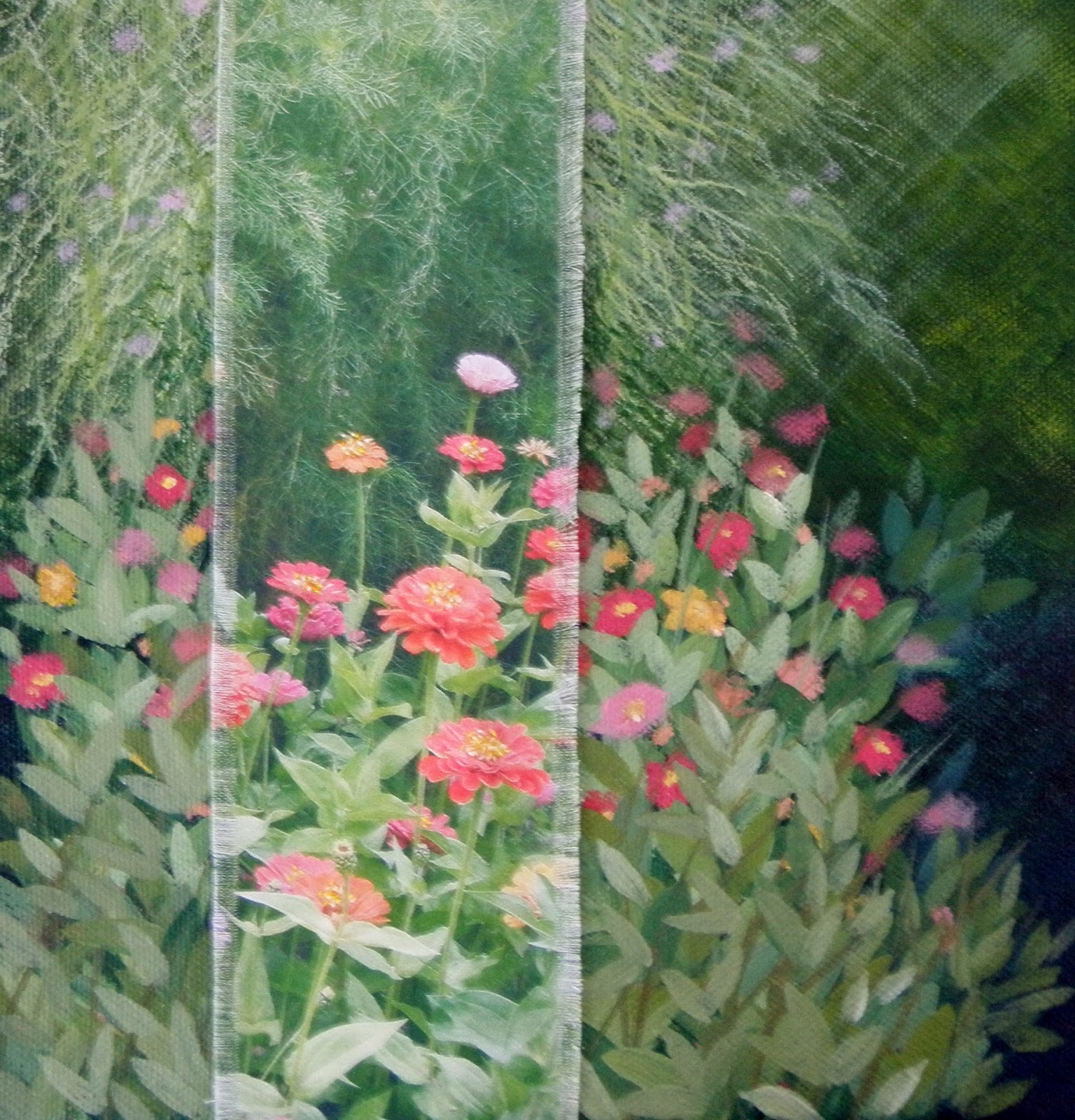 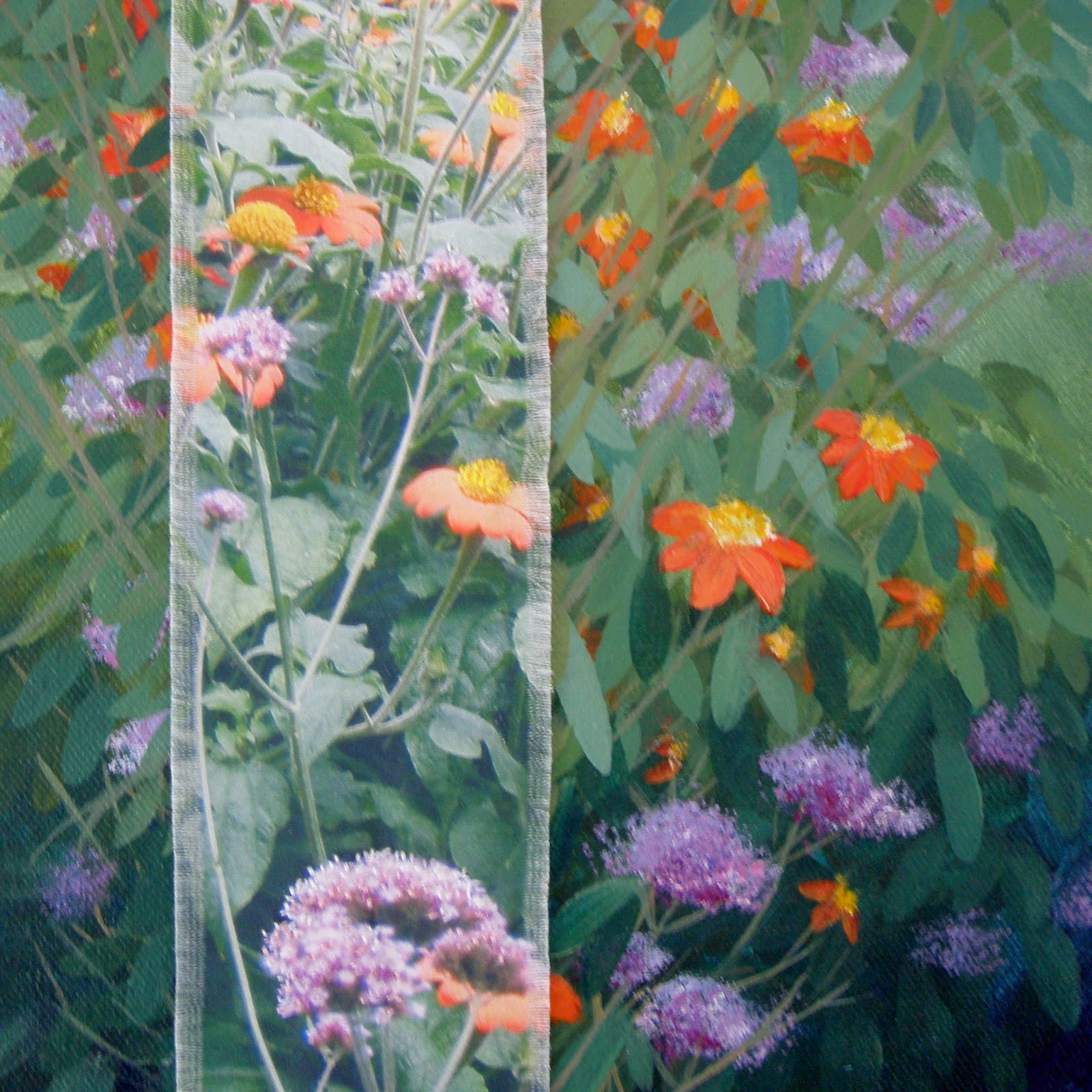 These two smaller pieces are also from the French photographs and have a fabric section with embroidered detail.


﻿
Posted by famillemitchell at 04:20 No comments:

Having sold some pieces of work before Christmas I was feeling quite elated, but then had to start asking myself where next. The temptation is just to repeat the pictures I have sold - but what is the point of that! I had to remind myself of something I have often said to students: 'repetition is not development'
So I have taken my own advice and gone back to my sketchbook 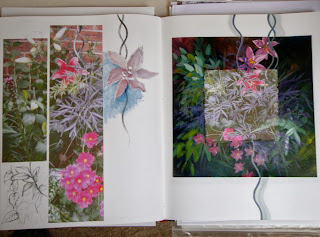 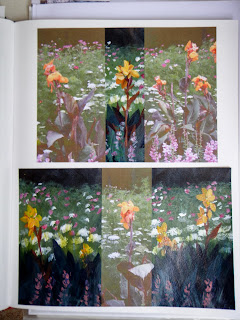 The idea is still the same but I am using different photographs, the bottom one is a photograph taken on holiday in France and I really like the composition.
I have also been trying out some sections of these using felting but it is proving to be a bit of a challenge so more of that later! 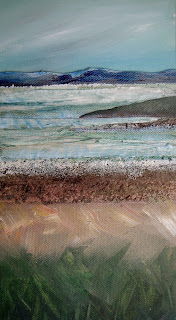 I have also been working on some more of the Scottish landscape ideas, trying to incorporate more texture using tissue paper and torn fabric. All very much work in progress at the moment but I do feel that I am starting to move forward - slowly!
Posted by famillemitchell at 05:33 No comments:

I finally have the time and the inclination to start trying to practice what I have been teaching for more than 30 years.
I am going to share what I am doing in the hope that I will be able to benefit from advice and constructive criticism! Yes the boot is definitely on the other foot!
﻿ 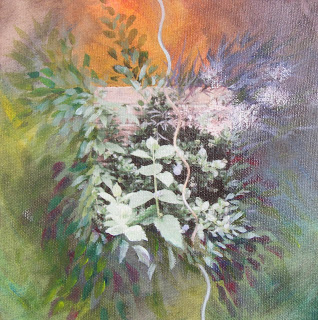 This is one of my first paintings based on my garden. The central section is a part of a photograph of the garden which was printed onto transfer paper and applied to the canvas. The painting is done in acrylics. 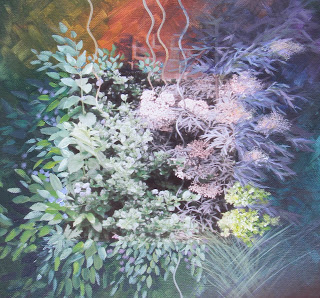 This is a variation on the same theme - on a larger scale. 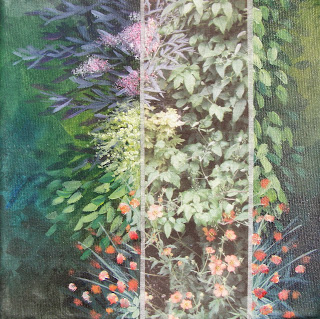 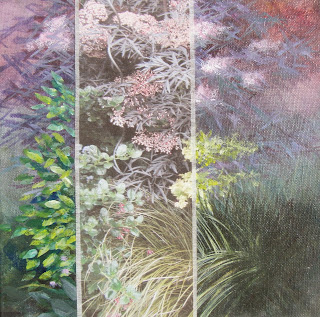 These two pictures take the idea a bit further. The photograph was printed on to fabric which I have added hand embroidered details to. I have frayed the edges of the fabric strips to emphasise the change of materials. 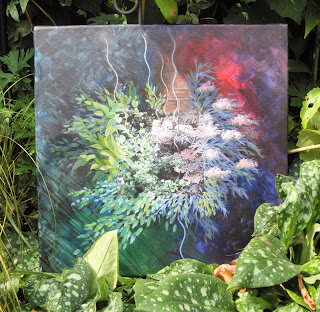 I took this photograph of one of the paintings in the garden - I really like the shadows from the grasses which fall on the picture. 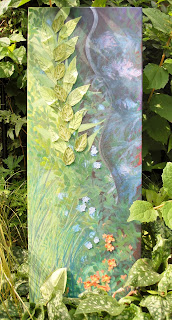 In this piece I wanted to emphasise the curvy plant supports which appeared in some of the other paintings. I created the leaves and the blue and orange flowers with machine embroidery and vanishing fabric and then applied them to the painting, the whole thing works quite well but the final effect is a bit twee for my liking.
I plan to revisit the garden pictures in the summer when hopefully the garden will give me more inspiration.

The next piece of work was produced for my mum from a photograph she had taken in Scotland. It is a fairly literal translation of the scene but it has given me inspiration for some new pieces of work. 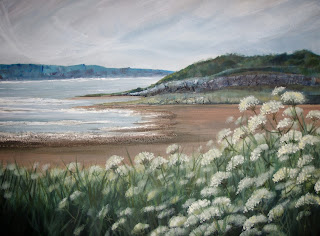 Whilst I was working on this painting I also started experimenting with needle felting which is a new technique for me and is really just like painting but with wool fleece. I began to think about how I could combine this with painting and here are the first attempts. 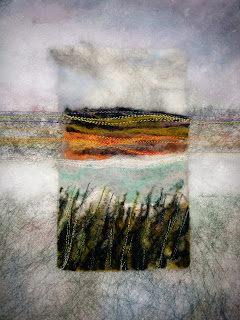 The background for this piece is painted on lutrador paper (at least I think that is what it is called!) which gives a really subtle effect which contrasts well with the felted area. I have also emphasised some sections with lines of machine stitching which helps to pick out certain areas and colours 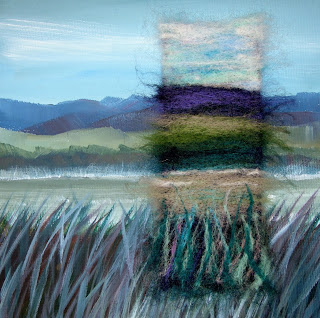 This second piece is a small canvas. I have left the edges of the felted section untrimmed so that it blends into the background and I decided to place the felted piece slightly off centre.
Posted by famillemitchell at 03:17 No comments: